Today I would like to show an approach to organize auto-formatting on a Clojure project from a practical point of view. I will describe the reasons behind choosing the tool and configuration for two different formatting styles.

In my experience having forced auto-formatting on a project leads to keeping code in consistent good-looking shape, reduces some of redundant discussions about code style during code review, and eventually better code understanding for a whole team.

To have all that benefits and not spend too much time every day to keep it working the tool and approach, in general, should meet certain requirements. For instance, we should be able to:

For now, as I see there are several mature tools for Clojure formatting which are:

cljfmt is really great I used to use it a lot, but it doesn't have a supported binary. For me, it is one of the main points because I would like to format code often without a need to keep REPL running. zprint has binary but the configuration seems a bit unintuitive to me.

There is one more tool that meets almost all my requirements: cljstyle. Despite it is not so popular as the tools described above It has a mature foundation cause based on the cljfmt code. cljstyle has a little different rules' logic but it doesn't affect the quality of results. It keeps all the good parts of cljfmt and even adds a few more improvements. The main of them are:

For the rule's configuration, we have several options. First, keeping default rules which mostly follow Clojure Style Guide except single space indentation for several forms (which is configurable too).

It is a more widespread and almost standard approach for now. It's useful for large projects which partially already have a near style like that. Because it will be faster to add rules with minor changes of a legacy codebase. Or for those who just like that formatting style.

But there is an alternative: universal Clojure style formatting. which is described in the article "Better Clojure formatting". I like the idea because it has a few rules, the same logic to treat different forms (actually, there could be one exception: imports) and it is not broken if once you will decide to add some new arbitrary macro. Also, you don't need to reformat a body of threading macros each time you change it to another one, for instance: -> to some->. Here are the rules:

Possible exception for ns formatting (because it is too common):

To change default behavior and configure cljstyle (for version >= 0.14.0) please place file .cljstyle to a root of a project with content:

I turned off the line breaking for vars because sometimes it is convenient to have var definition in the same line with its value. Also, rewriting of namespaces has been switched off because it conflicts with custom rules and it will be done with additional rules.

The key part is under :indents keyword. I replaced default indentation rules with of custom ones which as I supposed ideally should not be changed (at least too often). Let's describe the idea shortly:

By default, cljstyle forces two empty lines between code blocks and forms. I think it is reasonable because in my opinion, it improves readability a bit and makes it easier for eyes to distinct different functions.

But you could disable empty line editing at all or choose some custom settings for that. For example, if you prefer a single empty line between code blocks just add the following lines to the config map next to the last keyword:

Let's try to run formatting. To do that we could download the prepared binary from the releases page and run:

Now we can fix it:

There are some cases when you want (or need) to run formatting in a docker container. For example, in CI. Or to use a single way to run formatting locally by hand, on git hook, and in CI. You can simply build on your own or use the one I published on Dockerhub:

Or with simple docker-compose file:

Also, for convenience we could move command to bash-script or Makefile (with some logic for choosing fmt action) to have single "source of true" for that and avoid duplication it.

The tool is still being evolving and has some minor drawbacks which seem not so critical to me. I noticed the following:

One thing yet which is not actually a downside, but sometimes I miss it:

In the official repository, there is a page about using cljstyle with vim and emacs. I will show simple configs to format a current file or the whole project on a keypress in VS Code and IDEA.

To add fmt task you could create file .vscode/tasks.json at the root of the project with content:

If you would like format the whole project just replace ${file} to list of dirs whatever you want, for example: cljstyle fix src test dev.

Then you could add a shortcut to keybindings.json:

In IDEA we have an option to add external tool in Settings -> Tools -> External tools -> +. Then configure the fmt tool as shown in the picture: 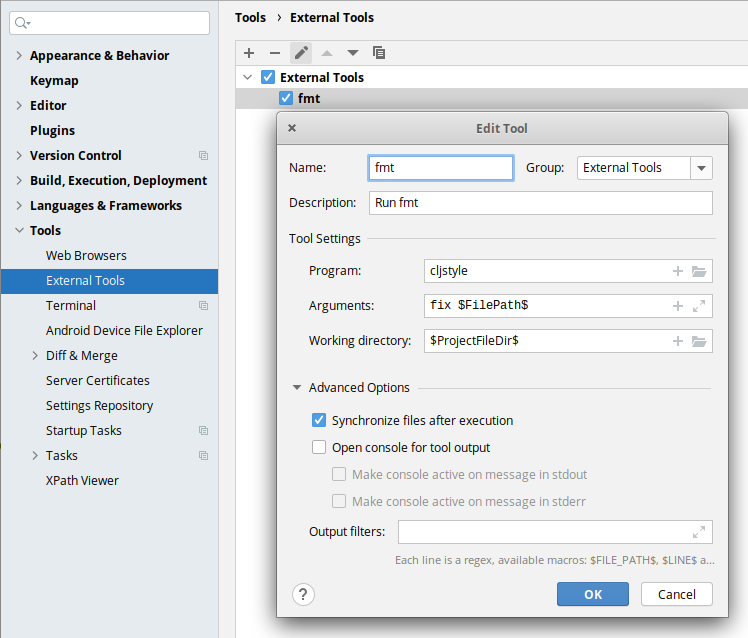 As before you could replace $FilePath$ to static dir list src dev .... Then add appropriate key bindings in Settings -> Keymap.

Check formatting on a git commit/push

The simplest possible way is to create file .git/hooks/pre-commit at the root of project dir containing:

Or you could use a bit more powerful tools like pre-commit or Lefthook. An example for Lefthook:

So I described an approach for formatting Clojure code which gives an ability to choose between two different formatting styles at the same time with execution speed in any environment. We didn't touch CI configs but the idea is similar and you could pick any of CI systems and apply the fmt command there.